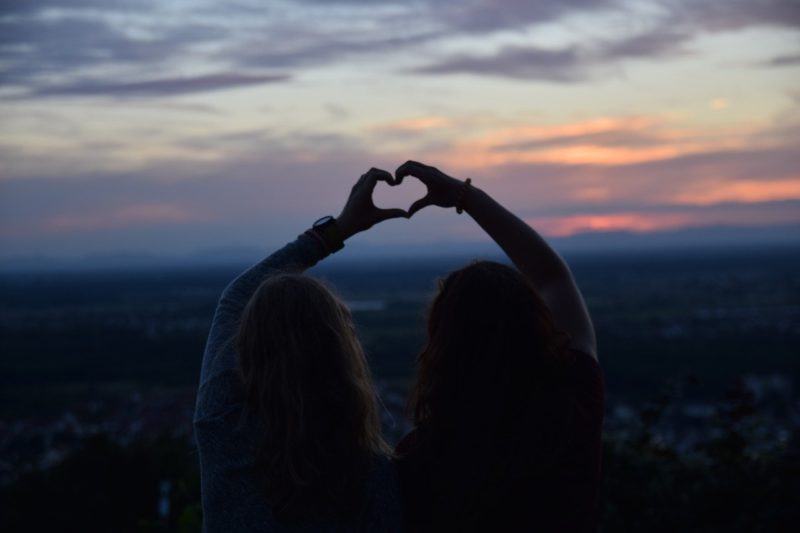 Growing up, I used to antagonize over who I was going to sit with at lunch when school would start in August. It set the pace for the year. I wanted to go from having a table-mate to someone that would later join me in sleepovers and giggle all night. I have written about making mom friends when I had a toddler and baby, but as my kids got older, I needed more than just casual playdate friends. I found that making friends as an adult can be a lot like dating. As an adult, I can see similarities going to social events with my kids. First impressions can be tricky. Am I talking too much about my own child? Did my child really just say that? Are our kids getting along well enough? Are we getting along well enough? And most importantly, can I see having a playdate down the road that includes perhaps a glass of wine? Now I want to tell you about how I changed friends (dating) into best friends (marriage) and how you can avoid the struggles at each stage as your friendship progresses.

Just like going to a bar when you were younger and kid-free, a birthday party can be the start to set a relationship in motion.  It’s easy to stay close to the friend who’s throwing the party. You know them. They know you. You already have a relationship. But if you just stick with them, you might be missing out on your partner in crime, your kindred spirit, your new Best Friend. You can start by watching your host and see who they are talking to most. Likely, you will get along with them if your mutual friend does. Or you might even shadow your child and partner up with the parent of their playmate. Either match can give you an in. Your conversations at the beginning of a potential friendship will be casual. This early stage is when first impressions will determine what will happen next. If you get along, marvelous! Time to advance to the next stage. 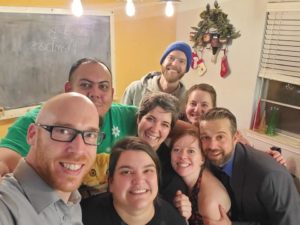 Having  a milestone birthday called for something special, not just a drink with friends. As a college student, I often threw murder mystery parties (MMP).  I have always loved dressing up and pretending to be someone else. I had thrown an MMP while I was pregnant with Ali but honestly, not drinking can get in the way of totally getting into my character and letting down my guard as much as I wanted. I started out inviting my best friend and her husband as well as a work friend and her husband, a couple that I had always felt connected to since meeting them, and a couple that I wanted to get to know better that had a daughter who was friends with mine. Most of them had casually seen each other but I knew they’d have fun together, especially adding some drinks to loosen things up.

You could set up a future playdate with the family of your child’s new friend if you need more time before moving onto one-on-one time. By spending time together in a new location or trying out an activity, you will have a chance to get more personal and find out more about each other. Adding children into any kind of relationship though can be tricky. Kids get sick just when you have epic plans, throw tantrums, fight over imaginary toys (thanks, Madi and Ali!), have “off” days because kids are weird, and other super fun reasons that ruin your plans. Gone are the days of getting together with friends when you can drop whatever you are doing spur of the moment to join an activity. While you don’t need to feel bad for canceling plans, make sure that you do indeed actually need to cancel them. Your new friends understand the struggles of being a parent and still want to get together. We all deal with our kids who can be real assholes sometimes. There have been times where I’ve wanted to stay at home where conditions are routine and I know what’s going on rather than leave the house. But once I got together with friends, I’ve found that getting out of the house helped me start fresh and was exactly the energy boost I needed. 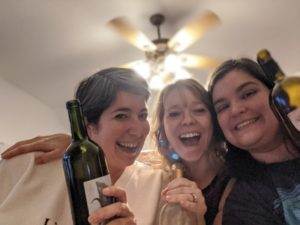 My party was a success. Everyone got along brilliantly. We decided to continue having MMPs, even making them hopefully a monthly get together. Unfortunately, it was November and the holidays were quickly approaching and thus began the busiest time of the year. Luckily, we live in a time where social media can help. We started a Facebook chat group so we could message at ease and share day-to-day funny conversations or ask each other for advice. We moved from just discussing our previous party to learning more about each other and talking less about superficial exchanges. We found out that we had what it took to move onto the next stage of our friendship.

When I became a parent, I learned some advice that has always stuck with me. You can put in the time now or put in the time later. Meaning, take the time to build your relationship by spending time together making a foundation or need to put in the time later as when your kids are teenagers rebuilding what has crumbled. The same can be said of friends. Yes, you need to make an effort and take time out of your day to build your relationship. Often, as mothers, we put everyone else ahead of ourselves. That includes relationships that benefit us, especially if they don’t help our kids or spouses. We have trouble putting ourselves first. But we can do this together! You’ll know this stage has been reached when you find yourself smiling about your friend even when they are not around. You don’t need to look for interests that you share anymore because you speak and text often. This person is someone that you want to tell when something meaningful happens, whether upbeat or upsetting. You are no longer acquaintances. You share inside jokes and might even be able to give them a look conveying your thoughts without saying a word. 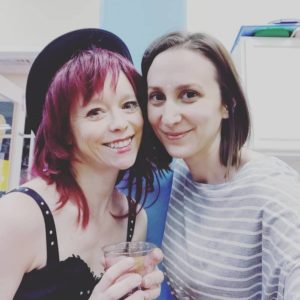 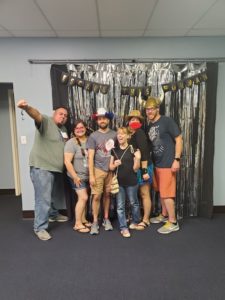 We had now given nicknames that we used for each other at parties and even outside of our get togethers.  I either saw or exchanged texts with someone from the group daily. Small talk was gone from our conversations and replaced with topics of deeper emotion. We now knew smaller details about each other that wouldn’t ordinarily come up in regular conversations with casual friends.  Our mystery parties had gone from purchasing ready-made games to members of our group writing the games. We knew each other so well that our games were tailored to characters we wanted to be.  Although our group had been six couples, we lost two people at this point. As a friendship deepens, each person should become more emotionally involved. Not every relationship needs to move on and that’s okay.

Your friendship has now blended your lives and includes each other in many of your activities. The more you merge together with someone, the more connected you will become. You often share intimate things between you, be it secrets or your favorite jeans, and pay for activities without worrying about paying each other back. You generally care deeply about each other; you might even tell the other that you love them. While it’s not a romantic love, it is a love that isn’t reached with most people you have in your life. It’s easy, knowing how close you’ve become, to forget to respond to a text (or two or more) or cancel an upcoming meetup because you’ll “see each other soon” but don’t! It’s a slippery slope and all relationships need to be cared for. 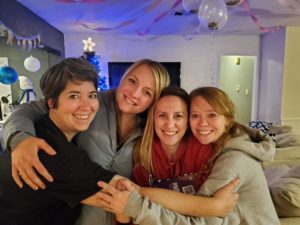 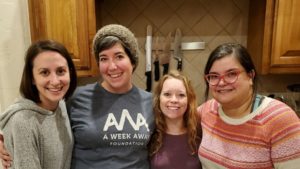 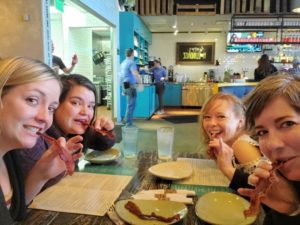 We knew when we talked about getting together, it was a given that each of us was invited. While we did get together sometimes without everyone from the group, the absent friends were wished for and the get together was missing a piece of what it could have been had the friend been there. We confessed our insecurities about our family life and cheered each other on through ongoing life changes. Because of this “fusing”, we made a special weekly event where we would help each other with chores that ordinarily would be grueling and replace it with all of us helping (along with wine and companionship, of course!)

As the final step of togetherness, this stage is usually reserved for marriage and not for platonic relationships. But as any mom knows, bonds between people do not have to be romantic. I know that seeing my baby for the first time brought about a new type of love that I had never known before. Finding a best friend is no different. This is a person who will know you in a very intimate way. They will see you in a way that most people never will. You can share your deepest secrets, look to them for advice, trust that they will love you on your saddest days, and this will all be without anything sexual involved. In romantic relationships, this stage is when a couple will get married. In a friend relationship, this is the stage when you become best friends. “Best friends” is not solely a person though. Best friends are a tier. 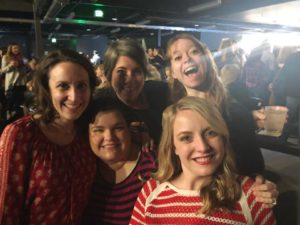 We were no longer just Christina, Jordan, Darcy, Blanca, and Becca. We had become the Femme Fatales. 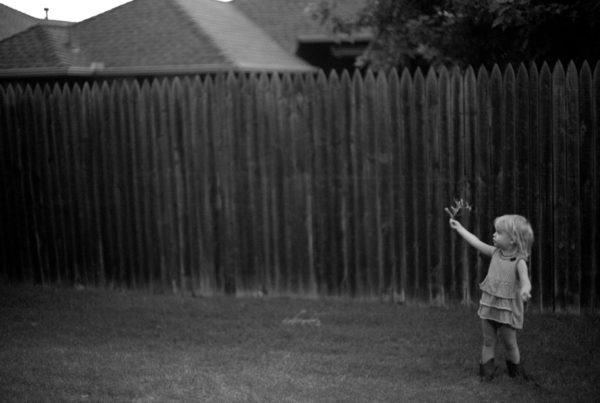 My Daughters are Princesses… and So Much More 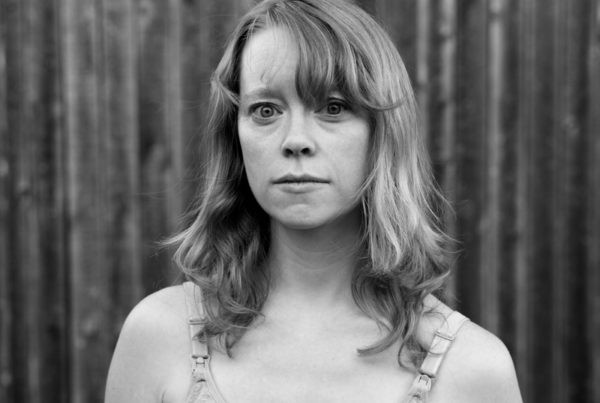 My Struggle with Postpartum Depression 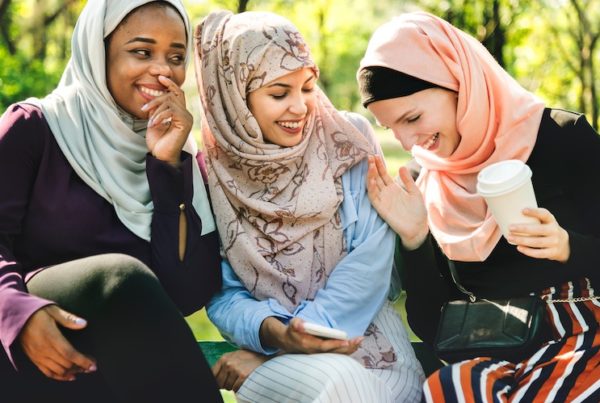